Watson two days earlier in a press conference praised the fast bowling that Pakistani team hold in their ranks. He admired their pace with some brilliant line and length. The way they are bowling they can create difficulties for any side Watson said.

Today Watson himself was out there facing the music and the musician the Wahab Riaz the fastest Pakistani bowler. Wahab made sure Watson didn’t touch a single ball with the middle of his bat.

This bat and ball contest was one of the best we have seen in this world cup. It was sheer pace bowling from Wahab and Watson well he was saving his face all the time.

Watson had no clue where the ball was and at what speed it is coming he was just dancing there on the wicket and it was looking as if he will not survive longer.

Wahab bowled one quick after the other. His each ball was passing near the nose of Watson and many times he would have even smelled it. He tried to play a few short ones but only was able to edge all of them.

During this whole contest Wahab was in continues talk with Watson. Sometime he asked him to play a pull rather than getting his face out of the line of the ball.

Then Wahab flew a kiss towards Watson and that made this contest even more interesting. Watson during this whole episode didn’t say a word. He was right on his back foot and trying to let Wahab’s over pass.

This was probably the first time we saw the Australians under a lot of pressure facing Pakistan in Australia. 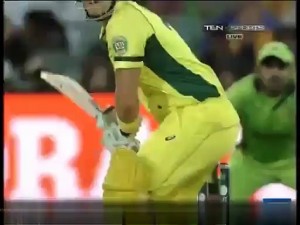