Battling legend of cricket in India, Sachin Tendulkar, said that he was honoured to be the World Cup ambassador at an event in showbiz capital Mumbai. Speaking to the thousands of fans gathered and shouting his name, Tendulkar said it’s different being a World Cup ambassador this time. Meanwhile, Tendulkar also gave a message for the team. Tendulkar knew how fans think when it comes to big tournaments and said that winning is not always possible. So even if things go wrong for the team, the support should always be there. The World Cup 2015 will be played in Australia-New Zealand from February 14 to March 28. India will play their first match against arch rivals Pakistan on February 15. 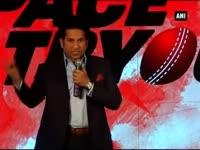