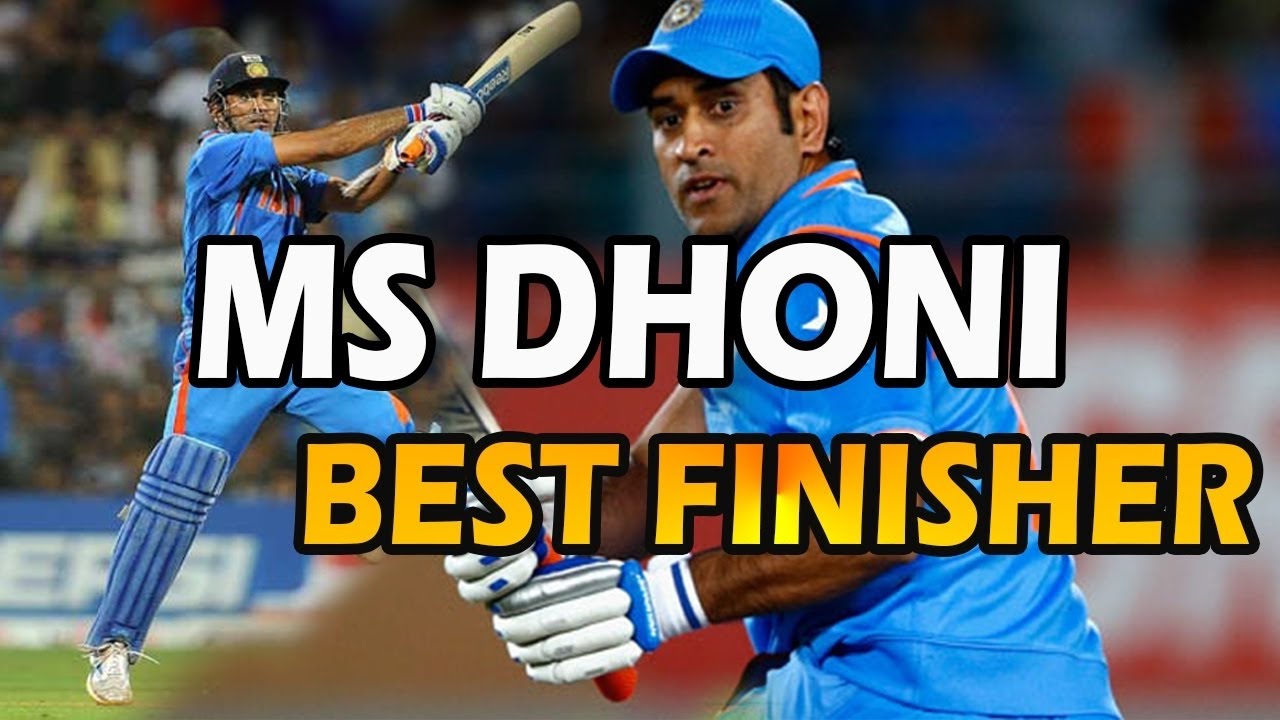 MS Dhoni, born on July 7, 1981, is unarguably the finest finisher the world has seen. Though Michael Bevan made a name as a clinical finisher in the bygone past, Dhoni revolutionised the approach to chasing and has surpassed the Australian with his remarkable feats. In 82 successful pursuits in One-Day Internationals (ODI), Dhoni averages an impressive 109.19 with two tons and 15 fifties.
1. A warning to all teams — 183 not out vs Sri Lanka at Jaipur, 3rd ODI, 2005

With those long locks, Dhoni had an intimidating look. Add to that, the ability to clear the ropes and you had a bowler’s biggest nightmare. In 2005, Dhoni had cemented his spot in the one-day side with some good performances, particularly the 148 against Pakistan. But, the innings that made the world take notice of the Indian dasher was his terrific 183 not out against Sri Lanka at Jaipur. Set a target of 299, India lost Tendulkar in the first over. Dhoni walked out at No. 3 to join Sehwag with a huge task ahead! What followed was utter carnage. Pacers were smacked through the line, spinners were swept and driven powerfully. The men at the other end went unnoticed as Dhoni completed one milestone after the other. The sparkling innings featured 15 fours and 11 sixes, taking India home with almost four overs to spare. The next highest score in the Indian run-chase was a mere 39! The 183 not out off 145 balls was also the highest score in a successful run-chase until 2011. Dhoni had arrived on the world stage!

Dhoni’s cricketing stakes rose through 2005-06 as he was a catalyst in India’s success in one-day cricket. The tour to Pakistan in 2006 is a landmark in his career for it showed that there was maturity within the apparent dasher. Tendulkar’s 95 helped India start their run-chase of 289 solidly on a track which had some help for the seamers. India found themselves at 190 for five in the 35th over with Dhoni joining Yuvraj Singh. In that pressure, Dhoni played with gay abandon and smashed the bowling to all-parts. He looked invincible as he reached his fifty in 35 balls. A solid knock from Yuvraj at the other end was eclipsed by this stellar display. Dhoni finished with 72 not out off 46 balls with 13 fours, winning the game for India with 14 balls to spare. At the end of the game, the then Pakistan president Parvez Musharraf took the microphone, congratulated Dhoni and said, “I saw a placard asking you to have a haircut. But, if you were to take my opinion, you look good in this haircut.”

Dhoni’s knock in the third ODI at Lahore in 2006 had won him many laurels. With the series in the bag, India headed to Karachi for the final ODI, eager to sign off on a high. India’s pursuit of 287 began gradually and the rate kept mounting as the innings progressed. With Rahul Dravid dismissed, Dhoni walked in the 31st over with 146 left to win. Along with Yuvraj, Dhoni commenced yet another pursuit against time. While there was no pressure to win, this innings stands out on pure quality of strokeplay. India needed 82 off the last 10 overs, which was quite an ask in those pre T20-days. Both batsmen shifted gears and toyed with the clueless Pakistan bowlers. Dhoni saved his best for the last as he struck four sixes in the spare of two overs to take India home with 19 balls to spare. India won the series 4-1.

Indian cricket was at crossroads in 2007. Having suffered the ignominy of a first round exit at the World Cup in the Caribbean, thanks to a defeat to Bangladesh, India were left to lick their wounds. As luck would have it, their first assignment after the big event was in Bangladesh. Dhoni had faced the fans’ ire after that defeat, with a group attacking his house under construction in Ranchi. Eager to set things right, he came with a mission to Bangladesh. India faced the possibility of another embarrassment in the first ODI when they were reduced to 144 for five in the 29th over, chasing 251 in 47. Dhoni (batting at No. 3 that day) was battling cramps but stayed through to anchor the innings with Dinesh Karthik. Tempering his usual aggression, he stroked 91 runs in 106 balls with only seven fours. India got home with an over to spare and commenced their redemption after a tough phase!

Until Dhoni was named captain, he was a dasher who wanted to tear into every bowling attack. Once handed the captaincy, responsibility crept in which made him one of the finest finishers in world cricket. Consider this: He scored 50 not out against Sri Lanka at Adelaide to win a game, without hitting a boundary. This would have been unimaginable a few months before that game. India were set a target of 239 and were going along well thanks to Yuvraj’s typically flashy innings. Once he was dismissed with the score on 158 in the 33rd over, Sri Lanka sensed a chance. Irfan Pathan gave Dhoni good company before he fell for 30. Though the required rate was well under control, but wickets were a problem. Ultimately, India were down to Ishant Sharma with the batting novice Munaf Patel to come. Dhoni merely worked the strike over and kept hopes alive. With three to get off the final over, Farveez Maharoof bowled a wide. Dhoni then hit the next through the off-side and sprinted for a couple to finish the game.

This will remain Dhoni’s most iconic and defining innings. A run-chase in a World Cup final, under pressure and on home soil; can the occasion get any bigger! Chasing 275 to win the title in Mumbai, India lost Sachin Tendulkar and Virender Sehwag early. Virat Kohli and Gautam Gambhir steadied the ship, but with the former dismissed with the score on 114 for three in the 22nd over, the game was in the balance. Yuvraj Singh had been India’s talisman through the tournament, but Dhoni put his hand up and walked in to bat at No. 5 on the big day. Starting off with singles, Dhoni then pierced the gaps through the off-side with ease. Muttiah Muralitharan and Suraj Randiv had no answers to his measured strokeplay. Though Gambhir was dismissed as India got closer, Dhoni held his calm and finished the chase with that big six over long-on. The 91 not out bears testimony to his Monk-like calmness. India won the title after 28 years, but captain restrained reactions when all of India exploded in unprecedented joy seemed like it was just another day in the office! Of course, in many ways, it was for him!

India were in command of their run-chase of 270 against Australia at Adelaide with Gambhir giving them a good start. Australia saw a ray of hope when they had India at 178 for four in the 35th over. Dhoni and Suresh Raina commenced the job of taking India through. While Raina looked at his fluent best, picking his opportunities to score, Dhoni cut a sorry figure. He was struggling to get it off the square and merely knocking it around uncharacteristically for singles. As India came closer, the rate was mounting and they lost Raina and Jadeja. With 13 needed off the last over, Ravichandran Ashwin took strike to Clint McKay. Ashwin only managed a single off the second, which left India with 12 to get off four balls. McKay pitched the ball on a decent length and Dhoni smashed it with all his energy over long-on. The straight boundary at Adelaide are long, but was dwarfed by the power of that hit. With six needed of three, Dhoni knocked them off with two balls to spare, thanks to a no-ball.