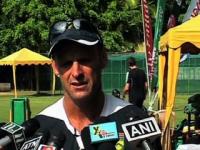 Colombo, Oct 1 – A weary South Africa is looking forward to salvage some pride and give themselves an outside chance by putting an ‘improved performance’ against India in their final Super Eights clash of the World Twenty20 in Colombo. Speaking to mediapersons South Africa’s Cricket Coach Gary Kirsten, today said that his team has had a disappointing run in the super eights so far, but they could make the cut into the final four by beating India and they are motivated to perform. Kirsten, further added that the team needed some inspiration to get back to its winning ways.

South Africa has lost both of their Super Eights matches, while India has won against Pakistan earlier. It’s a must-win match for both teams to stay in the contest.